Tribfest | Appearing at Tribfest for the first time...
Go to homepage
Menu

Appearing at Tribfest for the first time...

Today we've got another great new addition to the Tribfest 2014 lineup for the VIP Marquee. Each day we'll be announcing another band who'll be joining the lineup for the world's biggest tribute band music festival. Tickets are available and can be bought here.

Making their debut at Tribfest, New Jersey Jukebox, a tribute to Frankie Valli and The Four Seasons, will be playing in the VIP Marquee on Friday 15th August 2014.

New Jersey Jukebox  takes you on a a musical journey through the career of those Jersey boys Frankie Valli & The Four Seasons, whose songs graced such films as The Deer Hunter, Dirty Dancing and Grease.

From their beginning in the early 1950s, when Frankie first joined the group, this tribute show celebrates the greatest hits from the West End and Broadway Smash Hit Musical, such as Beggin; Big Girls Don’t Cry; Walk Like A Man; Lets Hang On;  Who Loves You; December ’63 (Oh What A Night); Bye Bye Baby; Can't Take my Eyes off You; Fallen Angel and Grease, climaxing with the finale of a medley of their greatest hits.

"…The standard of harmonies produced by New Jersey Jukebox is up there with the best. They perform all the required hits, of course, look smart and gel well together, plus their choreography is snappy and smart. The bar is constantly being raised in the Valli tribute stakes, as this act shows! - The Stage - Oct 2013 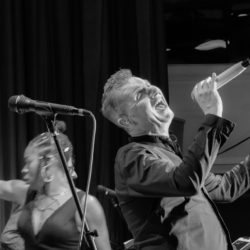